0
Credit
R Credit
Unavailable
Login or Register
Get the tailored Makro experience. Login for faster checkout, online order tracking and more.
Login
Register
All liquor stores will be trading responsibly between Mon - Fri, 9am to 5pm. However, we may close the doors to the stores earlier than stipulated to allow for final orders to be processed. Buy groceries and liquor through OneCart and get same-day delivery. See what we are doing to keep our customers and staff safe from COVID-19 here
Congratulations! Because you spent more the R {0} you qualify for FREE delivery or locker collection!
Labour law rules! 7352f5ef-5311-4e49-aa02-4ffcecf3ecf4 9781928309130 9781928309130 https://www.makro.co.za/p/7352f5ef-5311-4e49-aa02-4ffcecf3ecf4
Labour law rules!
Share
Product ID : 9781928309130
Write a review 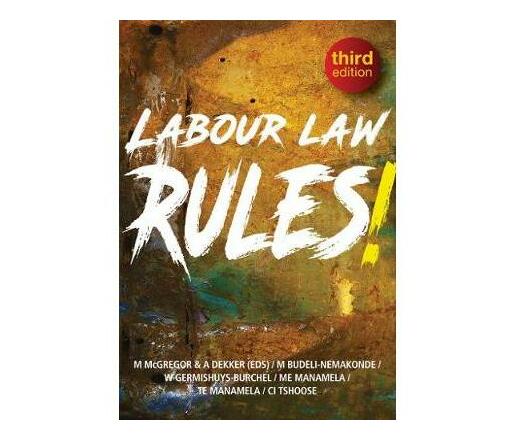 Find out More
Change region
Please be aware that you are about to change your selected region. This could affect pricing and availability of other items in your trolley.
Details
This now well established labour law text has been updated to reflect the law as of September 2017. Labour Law Rules! has provided a highly accessible text on labour, equity, social security and skills development laws over many years. It discusses these laws against a background of the country supporting the principle of `decent work,' high unemployment, the insufficient creation of sustainable and decent jobs, and income inequality, all exacerbated by an increase in atypical work, skills shortages, as well as insufficient enforcement of laws. The book is aimed principally at students who engage with labour law for the first time during their studies. Labour law is a compulsory subject for LLB students, and increasingly so for BCom students at South African universities. In addition, IR and HR practitioners, line managers, supervisors and union officials will all find the book useful. The contents cover the individual employment relationship in linear fashion from the time the contract of employment is concluded (and sometimes even earlier), through the course of the relationship during which an employee's conditions of employment must comply with minimum terms within a framework of regulated flexibility, and during which an employee is protected against unfair labour practices and unfair discrimination, up to the termination of employment when an employee is protected against unfair dismissal. Terminating the contract of employment for reasons other than dismissal such as resignation and retirement are also discussed. The rules of collective bargaining, which differ from the individual employment Relationship, are also explained and interpreted. The rules of social security laws are explained by following the three themes of these laws, namely to prevent workplace injuries, to compensate injured or ill workers and to integrate them back into the workplace. The text reflects recent statutory and other developments, and current debates. Cases and other examples are used to explain legal principles. At the start of each part, a recap and an outlook are given on the previous and the coming part to keep the reader in the picture and to provide some focus. At the end of each chapter, self-assessment questions and feedback are provided as well as additional recommended reading for the keen reader. This thoroughly updated Third Edition not only renders it completely current, with reference to the latest in legislation and case law, but also adds new commentary on the sections (197, 197A and 197B) of the LRA dealing with transfers of contracts of employment when a business is sold as a going concern or in circumstances of insolvency.